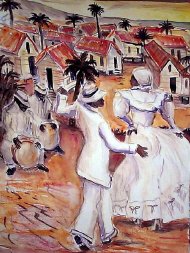 Home 9 About our music “La Plena”

by Neftaí | June 24, 2019
La Plena is an Afro-Puerto Rican music, “a hybrid musical form that integrates both European and African elements in its’ form and lyrics”, but was first dismissed as “la musíca de Negroes”.15 Practiced by both black and mulattoes in the coastal towns in southern and southeastern Puerto Rico, la Plena, like La Bomba, was born on the sugar plantations in the early 1920’s. It, too, had a call and response form. But unlike Bomba, Plena expressed the struggle of the working class and documented everyday experiences and happenings of the town, like a musical newspaper.16 The instruments involved in Plena are: a panderetas, guitar, cuarto, guiro, maracas, bongos, and congos.17

by Neftalí Rivera and Grupo Borikuas

Plena has a quick rhythm, where couples dance in “social position”, facing each other. The plena drummers do not dialogue, like in Bomba, but they do have solos.18Traditional clothing of Plena, unlike Bomba, is less conservative. Dresses did not have a neck, were short-sleeved, and had a skirt that came mid-calve. The dresses usually had floral or very colorful print. The male wears white pants with a shirt to match the women’s dress.19
For information on “La Bomba” you can find more here.

This site uses Akismet to reduce spam. Learn how your comment data is processed.